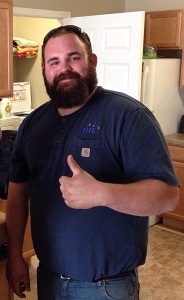 Something big happened in my house yesterday…and by big I mean BIG.To you it might not be very big, it might be something that happened in your house without the slightest air of significance. You probably don’t remember the day it happened or any part of the effort to make it happen. But for me, and my oil field friends, it was not only notable but called for a celebration.

We got unlimited high speed internet. In my place. Just for us. 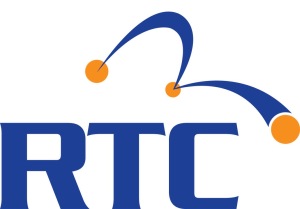 “Ryan Wifi” if you come hang out with me I’ll even give you the password.

Internet here is ANNOYING. If you are looking to move to Watford City, put internet on your list of “things that will be harder than they should be”.

Back in October when I was in Salt Lake City making calls to set things up for our impending move, I began my research for internet service. I was puzzled because the only internet provider I could find was called RTC. No Comcast, Quest, ATT, nada. Only the Reservation Telephone Cooperative. One company? That seemed antiquated and un-American to me and I was sure there would be more than one choice if I asked enough people.

So I called and spoke to a woman in the RTC office. I was a little put out when she explained that you had to sign up for a home telephone for $30/month on top of the internet, I may have also expressed some frustration for the low speeds available (the highest being 15mbps and no, I don’t like to buffer). She was nice but when she mentioned that the wait time for installation would be around 8 weeks I think my tone took a turn.

“8 weeks!” I exclaimed. “How in the world am I supposed to move there and be without the internet for 8 weeks? This can’t be the only option.”

“Listen!” She responded in a tone indicating that she was sick of people complaining to her. “A crane is literally driving past my window right now, a crane! This place is inundated with construction, our lines are cut by accident every day. Our population has grown from 1500 people to almost 15,000 in less than 3 years. We are the only internet company. We are working as fast as we can. This place is not like anywhere you’ve ever lived. It will be an 8 week wait!”

Her response made me stop and laugh. So tired of new people (like me) yelling at her. I apologized for being rude and then she and I chatted about the growth for a while. Her perspective gave me one of my first inklings of where I was moving.

I settled on a little hot spot box from ATT. I joined my mother’s family plan and was paying $100 a month for my cell phone, the hot spot, and 30 gigs of data. I jumped in on a promo and got a great deal (Most people are paying about $100/month for 10 gigs). I thought 30 gigs would be fine. 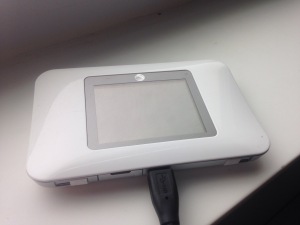 Here’s the thing though, about one hour of streaming uses about 1 gig of data. We don’t have a TV service we just use Netflix and Hulu. So we had less than an hour a day of streaming and had to keep other internet use to a minimum. Also, the service we did get was not great, lots and lots of spinning wheels.

We were limping by with interrupted shows and limited use, but enough is enough. We talked about becoming people who don’t watch hours of TV every night, people who don’t really use social media, people who don’t hand our kid an Ipad when he is annoying or play Xbox live or stream music while we clean or do our banking, communication, blogging, pictures, planning, navigating, research, reading, or relaxing through the internet… but, we just aren’t those people. 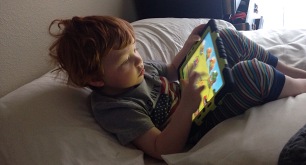 This may or may not be a picture of how I face the first hour of my day.

So, 6 months later we were back on the phone with RTC. To our delight, some things had changed a bit. Internet speeds in our area are up to like 250 mbps now and, because of where we live, wait time for installation is less than a week. We still have to pay for that phone but it’s funny what 6 months and lots of spinning wheels and show withdrawal and long winter boredom will do to make $30 extra a month for something we won’t use just not a huge deal.

Yesterday was the big day. Our new friend Mike came over and got us all hooked up. 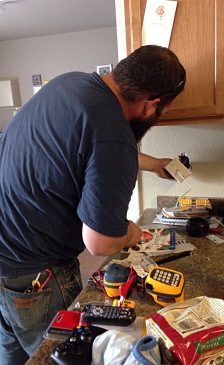 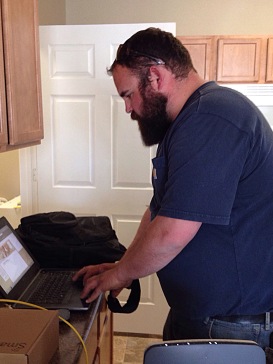 A router never looked so beautiful to me. 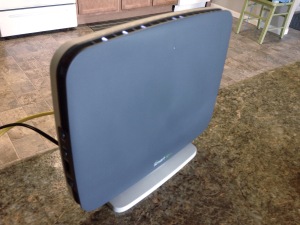 There are still places not too far out that RTC doesn’t service or that have a long wait for installation. Those people are still using cell data or satellite internet (which I’ve heard is not great). There are people here who waited months/years for the internet and will roll their eyes that 8 weeks was atrocious to me. There are those out in campers who probably want to throw rocks at me because I couldn’t hack it on 30 gigs a month – they are living on 10 or less. To them I say, you are more hardcore than I. Come over and be my friend and watch Netflix with me.

So, I guess what I’m saying is, internet doesn’t have to be annoying if you live in town and aren’t crazy money stressed when you get here. Just save 6 months and call RTC. http://www.reservation-telephone.com/

We will pay about $100/month for phone and internet with speeds of about 100/50. They came in 4 days and we are now binge watching Hulu all weekend.

Life is good. We feel welcomed to the future.