Next up: Charlce and Clay, a glimpse into a Man Camp. 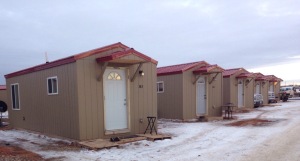 I first met Charlce because she teaches at the Wolf Pup and sometimes Benj joins her class. She has an adorable little boy, Easton, and a husband who likes to make a ruckus in a hilarious way. The first time I met him was when he grabbed the mic at the Parade of Lights and started belting out Christmas Songs, you can watch a clip of that here. The second time I met him he was wearing red onesie long johns at another holiday party (I’m so sorry, you’ll have to conjure up that mental image, all pictures have been confiscated hehe).

Anyway, they live in a man camp, so I had to pay them a visit and check it out. My thoughts were the similar to those you are having now, ummm don’t only men live in man camps? What are a cute girl and a baby doing there? Well first, they are hardcore as you would expect, and second, this man camp was not gross or scary.

It seems to me that there are several types of man camps. Man camp is a broader term that describes mobile housing, all identical and in rows that tend to house workers from the oil field.

There are RV man camps that look like this:

FEMA Housing Man Camps, which are literally disaster relief shelters used out here as long term housing. They look like this:

And there is Charlce’s Man Camp, what do we call them? They are made of wood but are not on a foundation, so trailer-ish I guess.

Every one of the structures has a parking spot and a little bit of space on the side. 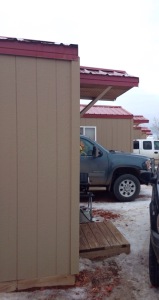 She is giving you her frontier woman pose. I love it.

Charlce and her husband Clay are from Idaho. Recently married they were expecting their first child together and feeling the financial stress. Clay had 3 children he supports from a previous marriage. He worked for the Sheriffs Department and she worked at a dialysis clinic. He said that some months he was barely making $1600 despite his longevity on the force and working on the swat and dive teams. At the end of 2013 she was laid off and their financial situation had become dire.

Clay got some info about a job working on power lines out here in North Dakota, checked it out, and before long the 3 of them (Clay, Charlce and 7 month fetus Easton) were arriving at the man camp.

So, the man camp… 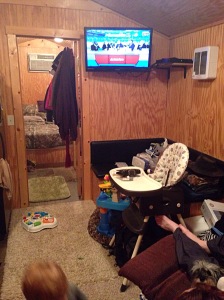 This is the view when you come in the door. Recliner to your right, kitchen to your left and a view back into the bedroom. 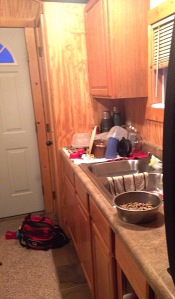 Here is their kitchen. Not a full kitchen, just a portable stove top and a convection oven. 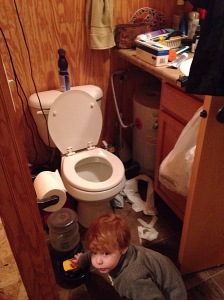 Here is Benjamin TP’ing the bathroom and emptying the dogs water bowl  all over the floor (thanks Benj). As you walk into the bedroom this is directly on your right.

And here is the bedroom, they made a little toddler bed there on the right.

Easton had chunk for daaaaaays, so in love with that face!

So here’s the nitty gritty on living at the man camp: They moved in at a discounted rate and pay $1550 a month (though most of their neighbors pay more). They are not there as a part of company housing but have independently rented this unit. Some companies will come in and house all their workers in one place but this man camp seems to be rented out unit by unit. That price includes a dish and a TV and they could pay more for internet but have opted out. They use a mobile hotspot for internet and go through about 10 gigs a month. They use the laundromat for laundry. The unit was furnished with a futon, an RV type table and a bed and then they’ve customized the place a bit. They took out the futon and replaced it with a recliner and have added shelving and the toddler bed. They’ve got about 200 square feet, again, they are unintentionally living the tiny house dream!

As far as work goes, Clay is out there anywhere from 60-80 hrs a week. Charlce says she almost makes more working at the day care here than Clay did on the police force in Idaho. Clay did have to buy some tools, boots and other work equipment to get started. They pay around $2000/month in health insurance to cover them and Clay’s kids in Idaho. I asked them if the money was worth it out here, Clay hesitated and said it wasn’t totally worth it. But, they were in dire circumstances and the money here is giving them a leg up, it is their only choice for now but hope that the future opens some other doors for them.

So why live here rather than another option in Watford? Charlce said they have looked at apartments and would pay about $2100 for the same space plus laundry and a full kitchen. They are here to save money and this was the cheapest they could find. They’ve also got 2 dogs and the pet deposits at other places they looked at were astronomical. For now, they are happy where they are until prices come down.

When Danny was in school we lived in the cheaper, more run down area of town in Logan, UT. Someone came to visit me once and asked if I was scared of living where I did. I found that, frankly, offensive, and really didn’t want to be that person sitting there questioning Charlce but, um, she lives in a man camp…. I had to right? She told me that her neighbors are quiet, keep to themselves mostly. They work lots of hours and she doesn’t see too many other people. She didn’t seem the least bit concerned about safety at the man camp.

Moving here has not been easy, but has given them the financial leg up that they needed to keep their family together. Clay works long hours, Charlce works all day but since it is a daycare she can bring her babe with her. The housing is, well small, and they miss Clay’s kids back in Idaho. But, to hear them talk about their situation before they came, I could hear the desperation and the panic. They were worried, scared about their future. North Dakota has been a salvation for them. Has given them stability and a chance to get back on their feet.

They reminded me how fortunate we are here in North Dakota, with a booming economy and jobs to go around. This is a place were families can come and make the money they need in order to stay afloat. Like Charlce and Clay, sometimes it takes sacrifice and grit but this place is do-able. It is strange and different and requires a change in paradigm but if you’ve got a little crazy in your blood, this place might just work for you too.

You can see the previous installment of You Live Where? here