Welcome to my new series: Boomtown HousingUpon meeting people around here, one of the first questions asked is, What is your housing situation? It surprised me at first, sort of an odd question, only because I was not yet privy to the knowledge of the assorted housing options ie: RV’s (campers, 5th wheels, different names for the same thing I think?), single wides, cabins, man camps, assorted versions of apartments, stick built homes (the regular kind), modular homes (the pre-fab kind) ….. I’m sure I’m missing many.

Being curious and a little nosy, I want to explore some of these housing situations. And, as a bonus, you’ll already know your options for when you move up here to live by me 😉

Bunking in the Bunk House

This is how my first convo with Jenny went:
Me: Where do you live?
Jenny: Its about 35 mins out of town in a cabin.
Me: A Cabin?
Jenny: Yeah a one room cabin.
Me: Ummmm, how many kids do you have?
Jenny: 4
Me: Wow, must be squished with only one bedroom.
Jenny: No, I mean one room, like one square room total.
Me: Oh, so you’re a crazy person?
Jenny: Yeah, I think people think I am.

I asked her to give me her best frontier-woman pose, she nailed it!

And so began my need to go and visit Jenny, and then blog about it. I’ll tell you right from the get-go, Jenny does appear to be a sane person. She is fun and hilarious and her kids are very impressive. And here is her story.

Not long ago she found herself living in Northern Utah, owned a home minutes from the beautiful mountains, husband worked as a welder, kids doing well in their kid life. There were a few frustrations, husband felt he had maxed out his potential at his job, life seemed a little too busy for Jenny’s liking, finances a bit tight but nothing too dramatic.

Then, an opportunity for welding work came up in North Dakota. Jenny’s husband thought he’d give it a try so the family put their things in storage, rented out their home and moved in with other family for the short term in Utah so Dad could come check out North Dakota and kid’s lives wouldn’t be too interrupted.

Dad came out and rented the Bunk House. A cozy little cabin in Grassy Butte. It is set in the middle of the owner’s land with another little cabin and a camper. Grassy Butte is right up against the Theodore Roosevelt National Park, home of the Badlands, so you can imagine how pretty the landscape is.

Dad was liking his job, family came out to visit over Fall Break 2013 and stayed in the camper. While only intending to stay for a week, when the whole family was back together separation didn’t seem like a good option anymore. Family never went back to Utah and moved into the Bunk House.

That is obviously the simplified version but this is what struck me when I was sitting on their couch, Jenny telling me their story while her kids chimed in every once in a while, their decision to stay was a democratic one. Each kid had a say, each kid was listened to. They prayed together as a family to decide what their direction was, and they all felt that it was here. Imagine the responsibility and empowerment that would give a kid? And as I would suspect, their kids are seemingly well adjusted. Their oldest girl, 13 years old, told me about a scripture she read that made her feel not afraid to leave their home in the Utah mountains and make a new home here. 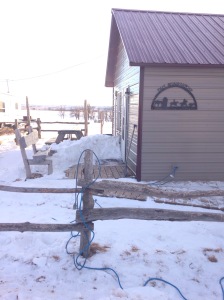 So here is the nitty gritty: We estimated that their little cabin is about 20 feet by 12 feet, giving them a total of 240 square feet. They are unintentionally a part of the tiny home movement!

Here are some pictures to give you context: 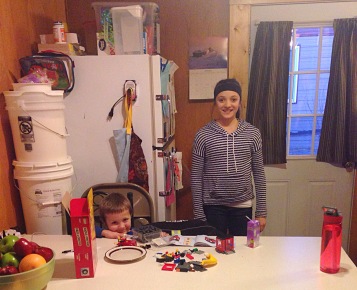 The Bunk House was previously used to house hunters or oil workers passing through. You can see the home of the landlords through the window, past the grazing horses and beautiful rolling hills.

I wanted to know how in the world you keep any sort of modesty in such close quarters. Jenny claims they don’t! Family members just yell at the others not to look when they are changing, the youngest sometimes pulls out the couch and crouches behind it.

Clothes are kept in totes and suitcases under the two bunk beds, toys and games are in totes up against the wall. They have a tv mounted up by the ceiling, some hooks with backpacks and coats. Their table can seat 6 and if they have guests, they have some buckets to pull down for additional seating. 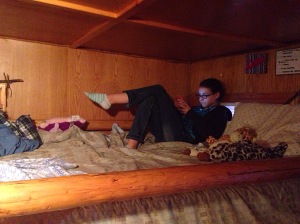 Here is the great part, they don’t need any more stuff. No more room, no temptation to spend their money on more stuff. I could learn a lesson or two from them.

Surrounding the Bunk House is a massive amount of gorgeous land. The minute the weather is bearable, the kids are outside. They run, build tree houses, share the ground with grazing cattle, anything their imaginations can think up. On the coldest winter days they keep to the inside, playing legos, doing homework, watching movies, and doing their best not to get on each other’s nerves. When they have a break from school they jump in their Suburban and head back to Utah for a visit.

I asked Jenny for the pros of living in their little cabin. She said that her life in Utah felt a bit like ground hog day, the same thing over and over again. Too many activities took their attention and time. Here in Grassy Butte, she says neighbors know each other, look out for each other, and appreciate the talents that they each have. The slower pace is what keeps Jenny here.

The cons? Less to do obviously. With less to do many people resort to drinking too much or getting into other trouble so you gotta keep your eye out, she says. Every one in Grassy Butte sleeps with a gun she tells me with a chuckle.  When I pushed her for more cons all she could think of is that she’d really like another bathroom.

Why live in the Bunk House rather than other options around here I asked her. She says her husband, being self-employed, needs 2 years of work history at this new job to qualify to buy a home, which is coming up soon, so renting was their only option for a bit. With the rent in Watford City being astronomical and her husband already set up in the Bunk House they just went with it.

I hope I am doing her tone justice, the woman is hard core and doesn’t even know it. She talks about their set up in the same tone someone talks about what they had for dinner. I can see the trickle of her attitude all through her family. Her kids are both impressive and sweet. Jenny has also gotten her EMT certification since moving here and works several shifts a week. Yep, hardcore.

By the end of my visit I could see the appeal. The landscape is breath taking around their home. I view Watford City as a small close-knit community and the people out in Grassy Butte view Watford as the big busy city if that tells you anything. Jenny feels at home there, focused on her family, happy with their direction.

I still think that maybe she’s a little bit crazy, the keepin-the-world-interesting, super fun, down to earth, I live in 240 square feet with my family of 6 kind of crazy.